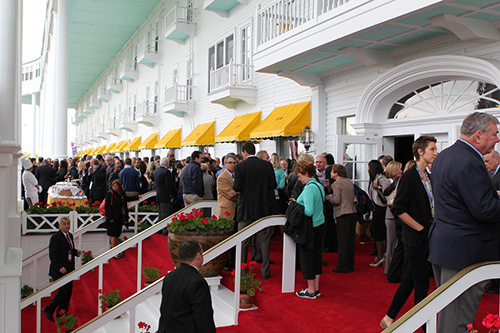 Malcolm Gladwell — a  longtime writer for The New Yorker and author of five New York Times best sellers — will be the keynote speaker in May for the 2014 Mackinac Policy Conference, the Detroit Regional Chamber announced Tuesday.

“Few people challenge the way we think about the world like Malcolm Gladwell, and he’s going to bring that thought-provoking dialogue to the Mackinac Policy Conference,” says Henry B. Cooney, president and CEO of Plunkett Cooney in Detroit, and president and chair of the conference. “Encouraging risk-taking and entrepreneurship is critical to growing the culture of innovation in Michigan. Gladwell will certainly help us explore how to challenge conventional thinking as we build our future.”

A writer for The New Yorker since 1996, Gladwell examined the factors that lead to success in “Outliers,” and how people think without thinking in “Blink.” He has been named one of the 100 most influential people by Time and one of Foreign Policy’s Top Global Thinkers.

“In the last three years, our state has transformed itself into a leader in the nation,” Baruah says. “Learning from Gladwell’s ability to challenge conventional wisdom can help ensure that the cultural change under way in Michigan continues.”

Approximately 1,500 attendees are expected to gather for the conference, which aims to create a more globally competitive and financially attractive business environment in Michigan through entrepreneurship, education, and impact.

For more information or to register for the conference, to be held May 27-30 at the Grand Hotel on Mackinac Island, visit mpc.detroitchamber.com.