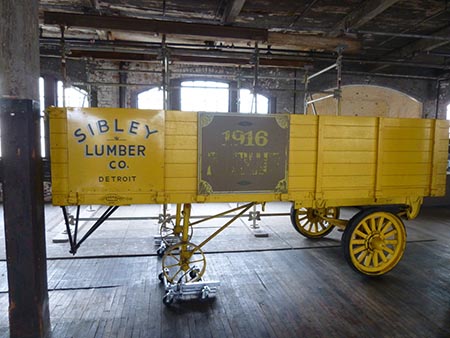 An exhibit featuring photography and memorabilia from the Fruehauf Trailer Co., the enterprise that invented the semi-trailer and hydraulic dump trailer, among other transportation inventions, will open next month at the Detroit Historical Museum in Detroit’s Midtown district.

“In exploring company archives I began to realize the vast scope of inventions and patents developed over its lifetime,” says Ruth Ann Fruehauf, granddaughter of founder August Fruehauf and author of a new book, Singing Wheels, August Fruehauf & The History of the Fruehauf Trailer Company.

“Over 1,000 inventions, 150 for the military alone, helped the Fruehauf Trailer Co. attain the rank of the 75th largest company in the world, so I felt compelled to tell this story.”

Fraser-born August Fruehauf, a blacksmith and wagon maker, invented the semi-trailer in 1914 with partner Otto Neumann for a lumber tycoon who then hitched it to a Ford Model-T roadster.

The exhibit opens June 7 and will feature photographs and company memorabilia from the family’s collection. It will remain on view for nine months.

Fruehauf founded the Fruehauf Trailer Co., which operated across the U.S., Europe, and Asia, and along the way invented hydraulic dump trailers, bulk tanker trailers, the automatic fifth wheel hitch, and the shipping container.