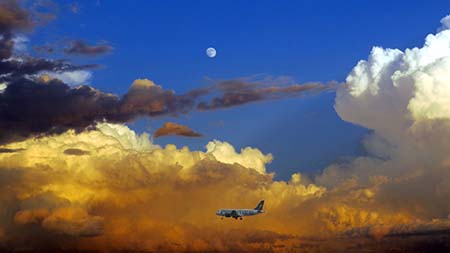 Frontier Airlines will add a daily non-stop flight to Orlando, Fla. from Detroit Metropolitan Airport starting in November. The airline will offer special fares for as low as $39 to celebrate the new service that begins on Nov. 18.

“Orlando is currently our customers’ second-most preferred destination from Detroit and for that reason, was one of our top priorities for new air service,” says Thomas Naughton, CEO of the Wayne County Airport Authority.

The flight will leave Detroit Metro Airport daily at 12:30 p.m. and arrive in Orlando at 2:55 p.m. The return flight departs the Orlando International Airport at 9 a.m. and arrives in Detroit at 11:30 a.m. The flights are on an Airbus 320, a 180-seat plane with a single aisle and two cabins.â€‹

Denver-based Frontier Airlines is seen as a competitor of Spirit Airlines, focusing on being a low-cost carrier. The airlines also flies nonstop from Detroit to Denver, Trenton, N.J., and Washington, D.C.