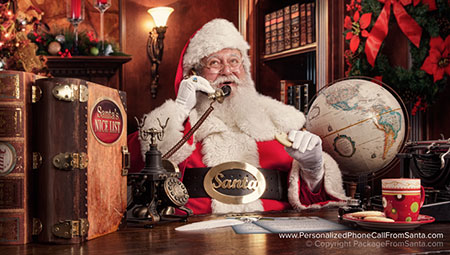 Washington Township-based PackageFromSanta.com has launched a new app that arranges a personalized phone call for children from Kris Kringle himself.

“This is our eighth season in business, and we’ve really grown from a technological standpoint,” says Dale Gruber, who co-owns the Christmas-themed business with his wife, Carey. “We’re starting to use the technology that’s out there to establish more of a direct connection between Santa Claus and children, whether it’s through a personalized video or a phone call on a mobile device.”

The app, available via the iTunes and Android app stores, allows parents to choose among several messages from Santa. The messages can be customized with a child’s name, age, state, and country. When the call comes in, the child’s name and photo will appear on the incoming call screen.

Parents also have control over what day and time the call comes in, which can be handy when kids need a reminder that Santa is watching them, Gruber says. What’s more, parents can schedule a call that specifically addresses naughty behavior.

“But I’m not recommending it as a parental control device,” he says, laughing. “I’m just saying Santa is a pretty powerful influence over kids.”

While Dale and Carey work year-round on creating content for the website, the bulk of their work happens in November and December. To ensure that deliveries make it in time for the actual holiday, the company ships packages, which can include everything from an autographed photo of Rudolph to one of Mrs. Claus’ cookies, until around Dec. 20.

Additionally, parents can still arrange for post-Christmas and birthday calls from Santa even after the holiday season is over, Gruber says.

Also new this year is the website’s “12 Days of Giving” promotion, which donates 15 percent of each purchase to national and local charities, including Detroit Dog Rescue and Forgotten Harvest (customers also get an additional 15 percent off their purchase price).

For more information about the offer, which runs from Dec. 1 to Dec. 20, click here. To learn more about the personalized phone call app, currently available at not cost, click here.