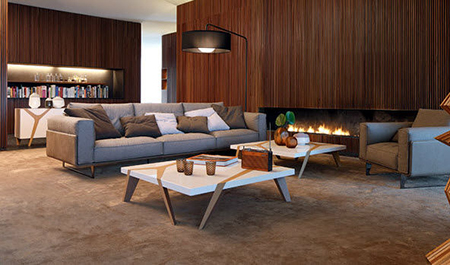 “We love being downtown,” owner Ed Hagopian says. “There’s no place like this in Michigan. It’s the place to be.”

Hagopian, who also owns Hagopian Carpet Cleaners three blocks from the Roche Bobois location at 394 S. Old Woodward, is moving the store from the Michigan Design Center, where he says the clientele was mainly interior designers.

“Roche corporate absolutely wanted a store in Birmingham,” Hagopian says. “That’s where (the company) felt the store would be most successful.”

He says although there was a Roche Bobois in Birmingham that closed in 1998, it had different owners and was part of an Englander Triangle Furniture store. The new, 5,400 square feet Roche Bobois is the first independent storefront for the retailer in Birmingham.

The city is also home to furniture retailers such as Ethan Allen, Arhaus Furniture, and Italmoda. Hagopian says that the competition of these stores definitely helps business.

“When an area can support multiple retailers, it’s a good sign.”