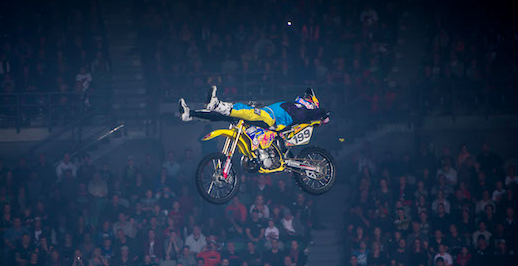 “We can’t wait to bring this all-new tour to North America,” says Travis Pastrana, a 17-time X Games medalist who will lead the show. “The stage set is over the top and will definitely pump up the crowd.”

The first woman to ever backflip a motorbike, Jolene Van Vugt, will attempt to do a double backflip on the tour, while X Games gold medalist Daniel Bodin will backflip a 400-pound snowmobile. Other contraptions include quad bikes and mini-bikes, among other motorized and non-motorized units.

Nitro Circus began as a television show on MTV in 2009 and follows Pastrana and his friends as they tour the United States. Nitro Circus: The Movie, which featured cast members from the TV series, was released in 2012.