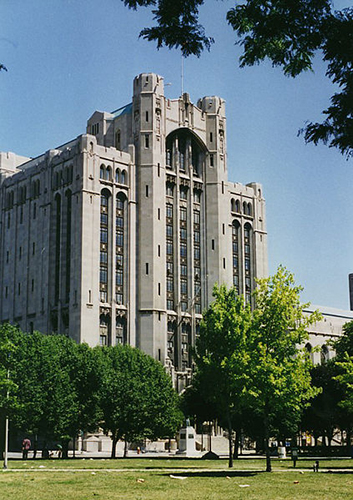 Detroit’s Zion Lodge No. 1 Freemasons — part of a secretive fraternal organization whose members have included Benjamin Franklin and Oscar Wilde — will celebrate its 250th anniversary as a Detroit institution with a two-day celebration later this month.

“We’re the oldest lodge in the state of Michigan, and we’re actually the oldest lodge west of the Allegheny Mountains,” says Troy Brownrigg, a member of the Detroit lodge. “We’re going to have multiple jurisdictions from the U.S. and Canada visiting Detroit for (this event).”

The lodge, which claims about 380 Freemasons, will kick off the festivities April 25 with a reception and strolling tour of the Masonic Temple in Detroit — the largest masonic temple in the world. On April 26, the organization will host a members-only ritual, while non-members can attend a special tour of the Detroit Institute of Arts. Later that evening, the Freemasons will hold their annual festive board, which is open to the public and held each year to celebrate the creation of the lodge.

“We usually keep (the festive board) small, but this will be on a large scale since we’re expecting about 250 people,” Brownrigg says. He adds that historic items will be on display, including the lodge’s minutes during the War of 1812, minutes when Gen. (Alexander) Macomb became a member, and the original charter from 1764, issued by leadership at the Free and Accepted Masons in New York.

“If you think about, our lodge is actually older than the United States,” Brownrigg says.

Origins of Freemasonry stem back to stonemasons during the medieval ages, and members in the Unite States today must be law-abiding men of at least 19 years of age who believe in a higher power and have good character. At least 14 U.S. presidents have been Freemasons.

In addition to raising two-thirds of the funds used to support the newly created University of Michigan in 1817, the Detroit chapter works on a variety of civic programs the construction and installation of wheelchair ramps throughout Detroit, Brownrigg says. “We’re not just a fraternity — we’re involved in philanthropic events,” he says.

For more information, or to purchase tickets for the event, visit zion1764.com.