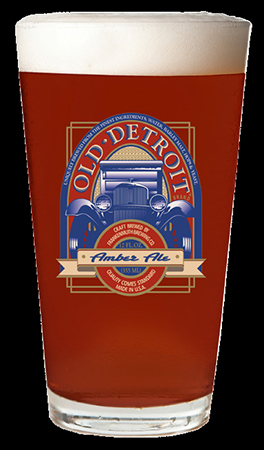 After nearly two decades on hiatus, Frankenmuth Brewery is bringing back Old Detroit Amber Ale, a popular craft beer that had stopped production in 1996 after a tornado ripped down the brewery and restaurant in downtown Frankenmuth.

Why revive the beer now?

“We know there’s a nostalgic interest in the beer,” says Maher Sarafa, brand director of Frankenmuth Brewery, “but it also feels like the city of Detroit is at an exciting crossroad. As the city looks forward to the future there’s still an amazing sense of historical pride for the past. Old Detroit Amber Ale was a part of that past and, we hope, a part of the future.”

Frankenmuth Brewery, founded in 1862, was nearly completely destroyed in June 1996 when a tornado cut a path through the city and outskirts, damaging 10 other buildings, including two churches and the library, and nearly 120 homes. As a result of the tornado damage, the brewery laid off 22 of its 30 employees and dumped about 2,800 barrels of beer, enough to fill 900,000 12-ounce bottles.

The brewery and restaurant were rebuilt in 2003, but closed due to financial troubles in 2006, says Scott Lorenz, a spokesman for the brewery. An investment group bought the business in 2009 and reopened the destination brewery, restaurant, and banquet facility in at 425 S. Main St. that overlooks the Cass River.

“What about Old Detroit? It was the first question out of most peoples’ mouths when the new owners of Frankenmuth Brewery re-opened the brewery and restaurant in 2009,” Sarafa says. “Casual and craft beer lovers alike would come into the restaurant all the time and ask about it. Our Brown Hound Dunkel, our Batch 69 IPA, the Little Bavaria Pilsener — we know people love these brews, but Old Detroit must have struck a chord back in the day,” Sarafa says.