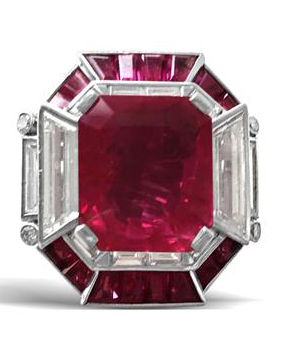 The jewelry of Linda Kughn, the late wife of Richard Kughn, the one-time president and CEO of Taubman Centers Inc. (formerly Taubman Cos.), will be auctioned by Schubot Jewelers in partnership with Joseph DuMouchelle Estate Jewelry and Auction in Birmingham next week.

“There are some really exquisite pieces that are part of this collection but there are also unique pieces that could appeal to almost anyone,” says Brian Schubot, owner of Schubot Jewelers in downtown Birmingham.

Schubot says the 140-piece collection offers jewelry priced anywhere from a few hundred dollars to a few hundred thousand dollars. He says Kughn, who collects classic cars and at one time owned Lionel Trains Inc., used the same collector’s approach with the jewelry he purchased for his wife.

Schubot says standout pieces include a 10-carat Burma Ruby ring that is expected to auction between $150,000 to $250,000; a pair of diamond bracelets that turns into a diamond necklace; and a diamond bracelet in the shape of a panther. He says there are about three to four diamond rings in the collection.

He says the collection is now being previewed in New York, and will be auctioned on March 11.

Kughn has been chairman, CEO, and president of Kughn Enterprises, a commercial real estate brokerage firm, since 1979, and has also served as CEO of Lionel Trains Inc. and as president of the Frenchtown Commons Development Co. He is active in numerous classic car shows in the region, including the annual Concours d’Elegance at the Inn at St. John’s in Plymouth Township (to be held July 29-31).