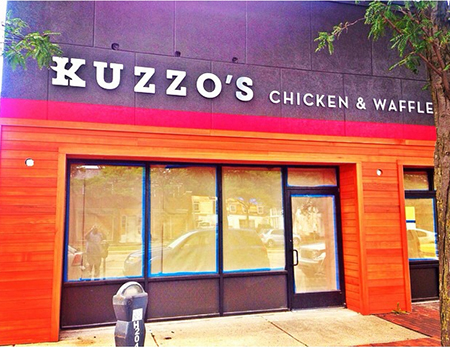 Ron Bartell, a former NFL cornerback who played for the Detroit Lions and St. Louis Rams, will open a southern-style eatery on Tuesday in the Avenue of Fashion district near the University of Detroit Mercy on the city’s northwest side.

“I grew up in this area,” says Bartell, a graduate of Detroit Renaissance High School and owner of Kuzzo’s Chicken and Waffles, at 19345 Livernois. “Detroit is making a comeback from downtown, Midtown, Corktown, and New Center, and when I looked around and saw all the great things happening in those parts of Detroit, I wanted to make a difference in the community I grew up in.”

Kuzzo’s Chicken and Waffles will offer breakfast and lunch, with plans to add dinner at a later date.

Menu offerings include a waffle combination served with three pieces of brined and seasoned buttermilk dipped fried chicken, served on top of two signature thin waffles with a side of slow cooked grits and two eggs; crispy fried shrimp or fried catfish filets served with a basket of chips; and salmon croquettes served with your choice of sides from red beans and rice, collard greens, candied yams, string beans, fried corn, mac and cheese, and biscuits or cornbread.

The menu incorporates both the city and the south, with names coined after vernacular heard on the streets of Detroit, like the “What Up Doe,” while others are categorized under “Southern Comfort.”

“Several of the recipes including the signature Kuzzo’s thin waffle are family owned,” Bartell says. “With more than 11 spices in the batter mix, my cousin Ray Bartell and I are the only ones who will make the waffle batter mix daily to ensure consistency.”

The restaurant also has a full bar, where southern cocktails and mimosas are served, along with alcohol-free sweet tea, freshly squeezed lemonade, Kool-Aid, and coffee supplied by Great Lakes Coffee Roasting Co.

Red Bull House of Art will curate artwork that will be on display and available for sale.

Kuzzo’s Chicken and Waffles is open for business Tuesday through Sunday 8 a.m. to 2 p.m. For more information call 313-861-0229 or visit instagram.com/kuzzoschickenandwaffles.

IN OTHER DETROIT NEWS, Detroit Mayor Mike Duggan, Mitch Albom, Detroit Free Press columnist and from the SAY Foundation, and Detroit Lions quarterback Matthew Stafford will announce Tuesday a new public-private partnership that would put to new use the vacant Lipke Recreation Center in northeast Detroit, which had closed more than a year ago due to city budget cuts.

The estimated $10 million revitalization plan, which will be presented soon to Detroit City Council, includes new educational programming and a series of new outdoor athletic fields and an indoor practice facility.