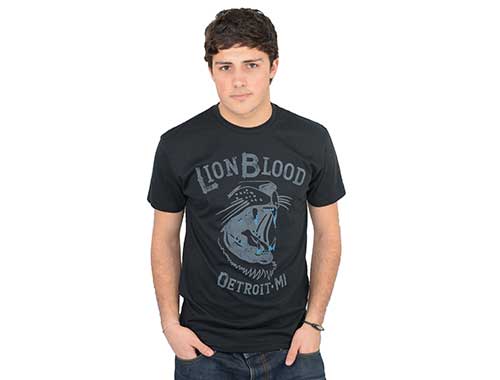 The Detroit Lions released Nate Burleson in February, but the popular wide receiver will continue to show Detroit pride through his LionBlood Clothing Co.

“We will continue to grow LionBlood as a homegrown Detroit, Michigan, company, even though I am not playing for the Detroit Lions,” says Burleson, who launched the clothing line with business partner Robert Montalvo last year. “I will be eternally grateful to the family, friends, and fans that helped me launch my brand in the same city I played in,” Burleson says.

The Canton-based clothing brand — an assortment of tees, hoodies, and sweatshirts featuring imagery of lions and plenty of Detroit allusions — released its spring collection earlier this month and is planning on a June release for its fall line. “We went kind of dark with the spring line, kind of against the grain. Everybody does bright spring colors, but we went with grays and blacks. We wanted to get that gritty feel of the city,” Montalvo says.

Customers won’t see as much blue this season, Montalvo says. “We’re trying to add this element showing that LionBlood isn’t just about Nate playing for the Detroit Lions. It goes beyond that. We want people to have a sense of pride (for Detroit); when they’re wearing LionBlood, we want them to feel like they’re part of the rebirth and growth that’s going on here.”

Montalvo says the company is looking to expand its retail footprint outside of Michigan and says the majority of the company’s online sales are from outside of the state.

Outside of LionBlood, Montalvo and Burleson, who has signed on with the Cleveland Browns, will soon be launching a second brand, a line of socks call City Socks. Montalvo describes the footwear as a “performance sock with fashion elements to it.” Priced at $18-20, each pair will feature area codes and skyline graphics related to cities including Detroit, New York, Los Angeles, Chicago, and Atlanta.

“We’re having a lot of fun with it,” Montalvo says, noting that the socks are in production and will be hitting stores within the next month or so. “With the trend that’s happening right now with socks that are very colorful, I think taking this approach that shows a loyalty to a person’s city is going to be something that catches on.”

LionBlood products are available through lionblood.com and at retailers including Caruso Caruso in Birmingham, Rock on Main in Northville, and Pro Sports Zone in Livonia.