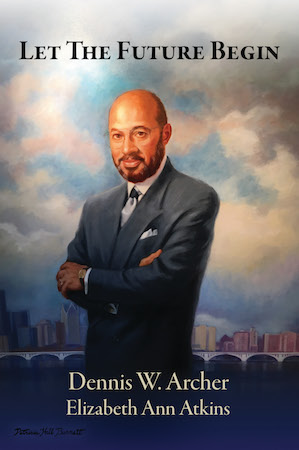 Former Detroit Mayor and Michigan Supreme Court Justice Dennis W. Archer today announced the release of Let The Future Begin, a book detailing his eight-year administration (1994-2001) and named after a slogan which he believes laid the foundation for Detroit today.

Written in collaboration with local author, journalist, and television host Elizabeth Ann Atkins, Let The Future Begin documents Archer’s life story and his role promoting diversity and inclusion in the legal profession on his road to public office.

“I wrote this story for my grandsons and for youth from all walks of life to show, that with education and hard work, you can rise above difficult circumstances and become successful in ways that uplift yourself, your family, and your community,” says Archer.

“That’s why I chose the title Let the Future Begin because it serves as my official record of how our citizens joined our leaders in government, business, and the nonprofit sector in a collaboration to rebuild Detroit.”

Prior to that, Mayor Archer was an associate justice on the Michigan Supreme Court and the first person of color to be named president of the American Bar Association and the State Bar of Michigan.

The book is published by Atkins and Greenspan Writing and is available in hardcover, paperback, and eBook formats. The hardcover retails for $29.38 and the paperback is $15.42. Purchasing information can be found here.