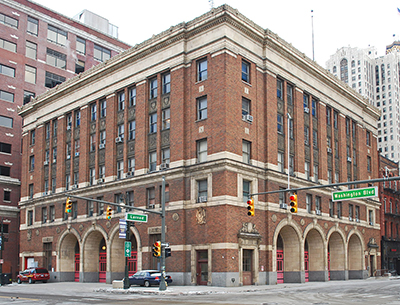 “We are inspired to be part of making Detroit a city beyond industry — a city of ideas, verve, and unmatched enterprise,” says Mario Tricoci, CEO and managing partner of Aparium Hotel Group, which will work with Detroit developer Walter Cohen on the project. “We are committed to raising the bar and delivering a hotel that captures the true character and hospitality of Detroit. There’s nowhere else we’d rather be.”

The $28-million Foundation Hotel will include a ground floor restaurant that pays homage to the region through partnerships with local distillers, brewers, farmers, and purveyors. A chef’s table will deliver a destination prix fixe experience as well as serve as an incubator for up-and-coming chefs and a homecoming platform for great chefs who have left the area.

Like the hotel and restaurant, retail space on the ground floor will showcase Detroit through collaborations with local manufacturers and designers, Tricoci says.

The hotel is expected to bring more than 100 full and part-time jobs to the Detroit market.

“Aparium Hotel Group’s investment in Detroit and plans to restore a historic landmark into a destination boutique hotel is exactly what our city has been waiting for,” says Dan Mullen, vice president of leasing and development for Bedrock Real Estate Services. “Detroit’s real estate market is prime for unique retail, housing, and hotels. I have no doubt that The Foundation Hotel will be extremely successful.”