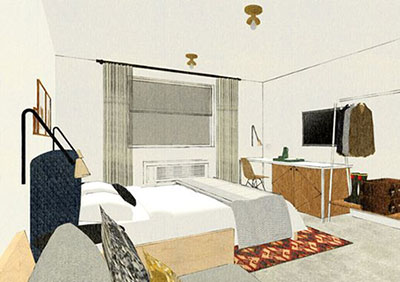 Detroit’s Corktown Inn at one time offered by-the-hour room rentals, however, starting in June, the hotel hopes to get a new start with about a $1.5-million makeover and a new name —Trumbull & Porter.

“The reputation of the property precedes itself,” says Brian Kelly, hotel general manager. “That’s another reason we’ll be changing the name, so we have a fresh start, fresh property, and fresh concept.”

The Corktown Inn operated for more than two decades, but last year, new management came in and it was renamed The Corktown Hotel.

“It was horrible when we got here,” Kelly says. He says the hotel assembled a team experienced in Detroit lodging, improved quality, and raised rates. Kelly says the hotel’s new image will fit in with the Corktown neighborhood because it’s an independent business and the vibe will be “cool and funky with casual class.”

Detroit-based Patrick Thompson Design is renovating the 144-room hotel, with renovations beginning in mid-June. The hotel will be stripped to its original concrete floors. Kelly says standard rooms will be simple and clean, with accessories made by local artists. There will also be eight rooms with Jacuzzi tubs.

“We’re trying to use as many local artists and local makers as possible,” Thompson says. “Hopefully the toothbrush holders and the soap dishes in the room will be made by a local ceramicist.”

The redesign will also include the lobby, which will be fairly minimalist, Thompson says. It will offer a coffee shop by morning and a bar by night. In addition, there will be lounges on the second, third, and fourth floors.

A restaurant and bar, along with retail space, will follow. The restaurant and bar will open up to a 20,000 square feet courtyard, which will include tables, fire pits, and possibly entertainment. The space can be rented out, as well.

The exterior will be painted, while a new entryway, windows, lighting, landscaping, a rooftop garden, and possibly a mural will be added.

Kelly says he would like to get the interior finished by December, focus on the restaurant and bar area in the winter, and open the hotel within a year.

The Corktown Hotel will stay open throughout construction. Once the remodel is complete, it will take the name Trumbull & Porter, based on the idea that the truckers who stayed in the original hotel used the intersection names in transit. Kelly says the target price range for standard overnight rooms will be between $99 and $129.