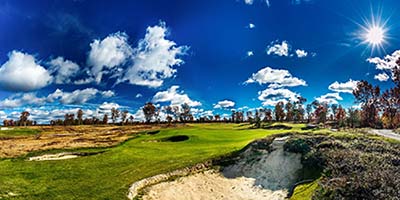 Forest Dunes Golf Club in Roscommon, near Grayling Township, has completed construction and seeding for one of the world’s most unique layouts — an 18-hole reversible course, called The Loop, that will be open for play next summer.

“I’m really pleased with it,” says Tom Doak, owner of Renaissance Golf Design, the Traverse City-based firm that designed the course. “Whichever way you’re playing, it never feels like you are going the wrong way.”

Doak says the course features wide fairways, and is inspired by The Old Course at St. Andrews in Scotland that was once reversed every week to let the course’s grass recover better. He says The Loop will alternate course routing on a daily basis so golfers can play each direction on back-to-back days.

Doak says the layout of the tee boxes took more thought because the routing of the back-and-forth course offers multiple changes in direction.

“You will be playing one hole, say west, and you will turn and play south for the next hole,” Doak says. “To make that seamless, some tees are in fairways or just on the edge of fairways. It’s still efficient, because the tees only need to be half as big for each direction — the sizes are based on the amount of traffic they have to handle.” 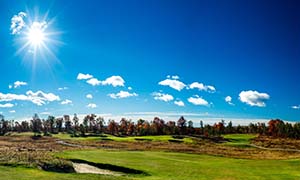 He says two of the best holes are the sixth and seventh playing in the counterclockwise direction.

“The sixth is a very short par-3 with a wide and shallow green, and the seventh is a short par-four with a long and narrow green that has a dip in the middle of it,” Doak says. “So you get one wide green and one skinny one whichever way you’re playing, but in either case, the short par-4 is one of the better holes out there.”

Some holes are expected to be ready for play early next summer with both directions to be open by August for limited preview play.

To read more from DBusiness about Forest Dunes’ reversible course, which was featured in the May/June 2015 issue, click here.