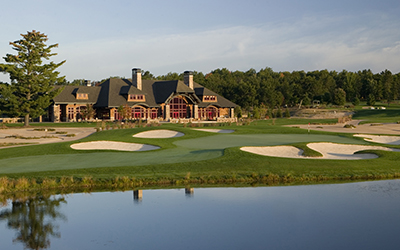 Editor’s Note: Forest Dunes Golf Club, located in northern Michigan near Roscommon, which opened for play in 2002 with the debut of a Tom Wieskopf-designed 18-hole course, has started to develop a second course. Scheduled to open as soon as 2016, it is one of a very limited number of new courses under construction in Michigan.

The news comes from golf blogger Tom Lang, who writes for DBusiness Daily News. In his most recent blog, Lang offers more information about the new course based on an interview with Todd Campbell, general manager of Forest Dunes.

To summarize Todd Campbell’s business philosophy: Utilize the assets you have and create the best customer experience you can from those resources.

In other words, don’t try to be who you’re not.

Campbell determined that Forest Dunes’ biggest asset is being ranked in the top 100 courses nationally by various golf publications.
In golf-rich Michigan, that’s saying a lot.

“We are attracting golfers from around the country that just want to play the top 100 golf courses, to mark them off their list,” Campbell says.
By contrast, he adds that the original owners’ plans were to make the property a private club, complete with residential homes.
In a remote part of our state, that’s asking a lot.

So Campbell’s vision has been to focus on high-end public golf and add more overnight accommodations for stay-and-play packages. “Really just push the golf experience.”

He suggests amenities like swimming pools and spas have annual operating and maintenance costs, and some of those features are only available for use for six months of the year.

“So let’s use the amenities we have, the natural surroundings like Higgins Lake and the Au Sable River system, some great state parks, and use the golf course and accommodations and the fabulous clubhouse we have,” Campbell says.

The formula resulted in Forest Dunes turning its first-ever profit last year since the property opened for play in 2002. A key cog in the machine came in 2013 with the opening of the 8,500-square-foot, 14-room Lake Au Sable Lodge that overlooks the lake and the first tee. There are also a number of golf cottages for rent on the property.

“We purchased a business that had never made a dime in its existence (and lost millions), and within two years we’ve turned a profit,” Campbell says. In its first year alone (2012), visitors from 33 different states and from seven different countries used the lodge.

“That building changed our whole life,” Campbell says. “We’re getting more people that come in, they golf, they dine, and they golf some more. They spend money in the pro shop. And that’s our target market. I’d be willing to say this has been one of the biggest turnarounds in the golf industry, and continues to be, in the last decade.”

A second golf course on the property is under way. Currently the crew is popping stumps based on routing by famed designer Tom Doak (who has an office in Traverse City). Ideally, the initial work will be completed this year. Shaping would begin next year, with final shaping and seeding to take place in fall 2015 (with a possible 2016 opening).

Tom Lang is a freelance writer who has written for Detroit Free Press, Lansing State Journal, and GolfWeek. He is also a regular blogger for DBusiness magazine.