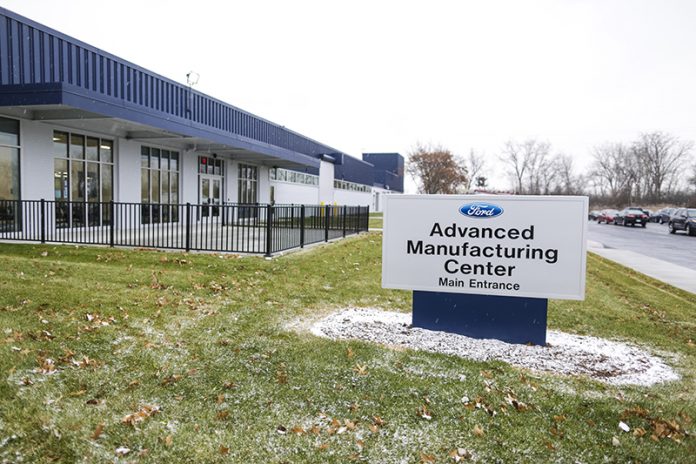 Ford, which revolutionized vehicle assembly in 1914 at its former Highland Park Assembly Plant, says reimagining manufacturing is in its DNA.

“More than 100 years ago, Ford created the moving assembly line, forever changing how vehicles would be mass produced,” says Joe Hinrichs, Ford’s president of Global Operations. “Today, we are reinventing tomorrow’s assembly line – tapping technologies once only dreamed of on the big screen – to increase our manufacturing efficiency and quality.”

During a walk around the facility, an engineer monitors the output of 23 3-D printing machines, which are cranking out parts for Ford’s soon-to-be-introduced Shelby Mustang GT500. So far, the parts are small and for low volume vehicle lines. The automaker plans to build more parts at a larger scale in the future.

Ford also is working with 10 3-D manufacturing companies to develop applications with different materials – from sand to nylon powder to carbon. One application currently in development has the potential to save Ford more than $2 million.

Another engineer is working with a collaborative robot, also known as a cobot, programming a safer way to install a vehicle part.

Ford has more than 100 cobots deployed in 24 plants around the world. The robots are smaller and can work safely alongside people, without protective cages. At the Livonia Transmission Plant, for example, a cobot performs a job that was so ergonomically difficult for employees that they could only do that job for one hour at a time. The cobots also help Ford reduce costs by eliminating the need for expensive safety cages that larger robots require.

“While we are increasing our use of collaborative robots, we strongly believe there is a need for both people and robots,” says Hinrichs. “People are better at doing certain jobs, while robots are able to perform certain tasks, including those that are ergonomically taxing for people.”

Across the room, a pair of engineers use virtual reality headsets to design and simulate production lines. Ford is banking on augmented and virtual reality to help it simulate and design assembly lines to build millions of vehicles.

Here’s how it works: Experts don specialized gaming equipment and configure a virtual reality production line without ever leaving Redford Township, allowing them to identify potentially hazardous maneuvers and fine tune workflow long before an assembly line is constructed.

They also develop specialized experiences in augmented and virtual reality to allow Ford manufacturing teams to work collaboratively in plants around the world, enabling people on different continents to work in the same virtual experience simultaneously.