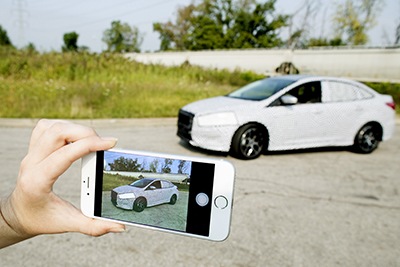 In order to keep new prototypes under wraps when testing on public roads, Dearborn-based Ford Motor Co. is using vinyl stickers on the vehicles with patterns that hide body lines and can trick the eye or camera lens.

“The work we’re doing is crucial to Ford staying competitive in a constantly evolving industry,” says John LaQue, section supervisor of prototype planning and build at Ford. “When we make it to a reveal without a photo surfacing of a non-camouflaged car, we have all done our jobs.”

LaQue says unlike the vinyl cladding that is typically used to conceal concept vehicles today, the vinyl stickers are stuck on a car in no particular order, are more durable, and allow for more accurate testing because they don’t add as much weight to a vehicle. LaQue says faux body panels are also used to change the look of a car by adding height or length to the vehicle.

LaQue says Ford must test its vehicles on public roads, yet the automotive industry is challenged with keeping its concept vehicles under wraps before their public debut. He says with virtually everyone now in possession of a camera, it’s been more difficult than ever to keep a car hidden. In turn, the new technology will make it more difficult for photographers to capture spy photos — a constant complaint among automakers for decades.

“We have said very clearly that we are not in NASCAR just to race, but to win races and championships,” says Dave Pericak, global director of Ford Performance. “We believe the addition of Stewart-Haas Racing in 2017 will give our program a major boost in terms of being in contention for both drivers’ and manufacturers’ championships every year.”