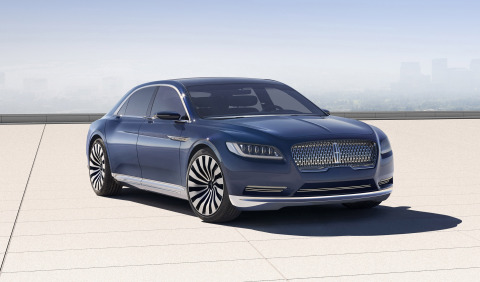 Dearborn-based Ford Motor Co. today introduced a redesigned Lincoln Continental, a full-size sedan slated to hit the market next year. The vehicle, to be introduced at this week’s New York International Auto Show, brings back the name of the car company’s signature luxury vehicle.

“The Lincoln Continental name is associated with iconic beauty and elegance,” Woodhouse says. “Capturing those qualities and building upon them drove us as we crafted this thoroughly modern sedan concept.”

The Continental concept will feature a centered chrome grille, doors that open with the touch of a button, and LED head lamps. The car’s signature color is a metallic blue.

The sedan’s interior has leather seats, rose gold trim, and a tinted sunroof. The rear seats feature a lap tray and a champagne storage compartment. The Continental Concept has a 3.0-liter V6 engine. The MSRP has not been released.

The original Lincoln Continental was produced in 1939, and was Edsel Ford’s personal vehicle. Production of the vehicle was suspended in 1941 after the attack on Pearl Harbor, and then re-started again from 1946-1948. The Continental name was revived in 1955 as a separate Ford brand, and was one of the most expensive cars in the world at that time, retailing for around $100,000. The car was completely redesigned in 1961 and was last produced in 2002.