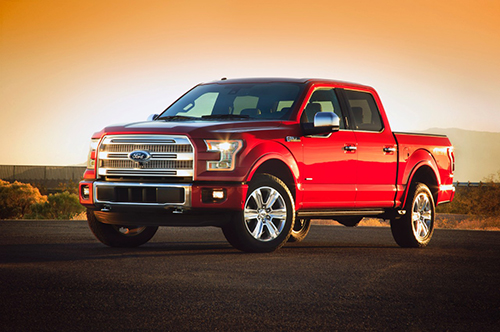 “F-150 is well-known for being ‘Built Ford Tough.’ Now, it is both tough and smart,” says Mark Fields, Ford’s COO. “The all-new F-150 redefines the future of trucks, and it is yet another example of our One Ford plan producing vehicles that serve customers with a commitment to the very best quality, fuel efficiency, safety, smart design, and value.”

Featuring more high-strength steel than previous models, the 2015 vehicle uses high-strength, military-grade aluminum alloys. As a result, the lighter F-150 can tow and haul more, as well as accelerate and stop more quickly, says the automaker.

Several features debut in the new F-150, including a 360-degree camera view, which helps the driver park, maneuver in tight spots, and navigate down narrow roads and trails; integrated loading ramps, which enable easy loading of ATVs, motorcycles, and mowers; and LED headlamps and taillamps, which provide nighttime visibility.

It also includes a new rearview camera feature called trailer hitch assist, which helps drivers line up truck and trailer without requiring a spotter or having to get out of the vehicle, and a remote tailgater, which eliminates the need to manually lock a tailgate.

The F-150 also features segment-first technologies that automatically assist drivers including: curve control, which automatically provides more aggressive four-wheel braking when the truck is going into a corner too fast; adaptive cruise control, allowing drivers to set a cruising speed and use radar technology to monitor traffic ahead and maintain a safe distance between vehicles; and a blind spot information system with cross-traffic alert, which uses radar hidden in the taillamps to detect a vehicle entering a driver’s blind spot.

By the time the truck goes on sale late this year, it will have been tested for more than 10 million miles. These tests simulate the demands the truck will be subjected to throughout its average lifetime and include pulling heavy trailers and hefty loads through desert valleys and over high-altitude mountain passes — in temperatures from 20 degrees below zero to 120 degrees Fahrenheit.

“(We) see 25 percent growth in the years ahead,” Mulally says. “Ford and Lincoln will launch 23 vehicles this year, (add) two new plants in China and one in Brazil, and add production in Russia, Turkey, and six plants in America.”

The F-150 will continue to be manufactured at Ford’s Dearborn Truck Plant in Dearborn and Kansas City Assembly Plant in Claycomo, Mo.