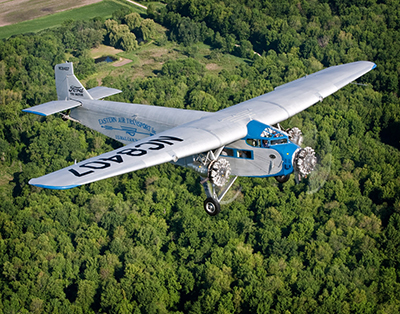 The 2014 Ford Tri-Motor Tour — which provides public rides in the aircraft that launched the modern aviation industry — will make its final stop this month at Oakland County International Airport in Waterford.

Automotive pioneer Henry Ford, and his son, Edsel Ford, produced the first Tri-Motor in 1925, making nearly 200 of them until 1933. The Tri-Motor No. 146, being used for the tour, was built in August 1929 for Eastern Air Transport, which later became Eastern Airlines.

“The Ford Tri-Motor hearkens back to the Golden Age of Aviation, when Oakland County International Airport became the first airport in America to be certified by the federal government,” says Oakland County Executive L. Brooks Patterson. “Taking off in this plane is like transporting yourself back into history.”

“It’s a very popular attraction and is a great piece of history that’s particularly relevant to the Detroit area, ” says Joe Kirik, a spokesman for Oshkosh, Wis.-based Experimental Aircraft Association, which hosts the tour.