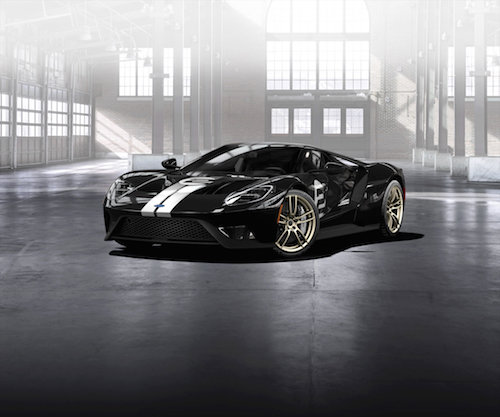 Dearborn-based Ford Motor Co. will release a limited edition 2017 Ford GT in a Heritage theme to celebrate the 50th anniversary of the GT40 Mark II victory by Bruce McLaren and Chris Amon at Le Mans in 1966.

“Celebrating the anniversary of Ford’s historic victories at Le Mans has always been a part of the return of the Ford GT,” says Raj Nair, executive vice president of product development and CTO at Ford. “The 2017 Ford GT ’66 Heritage Edition is a … tribute to the car that kicked off Ford’s string of Le Mans victories in 1966.”

The Ford GT ’66 Heritage Edition will feature a shadow black exterior, offered in gloss or matte, with a silver-striped hood and exposed carbon fiber package. The exterior also features a white No. 2 on the hood and doors, 20-inch aluminum forged wheels with a gold satin clear coat, and black lug nuts.

“While the looks are distinctly based on the GT40 Mark II race car, we’ve accentuated new styling cues to provide a modern interpretation,” says Garen Nicoghosian, exterior design manager of the vehicle.

The Le Mans sports car race has been held annually since 1923 near the town of Le Mans, France. In 1966, the Ford GT took first, second, and third place in the race. In June, on the 50th anniversary of the race, Ford placed first, second, and fourth in the GTE Pro Class series at Le Mans.

The limited edition Ford GT will only be offered in 2017.