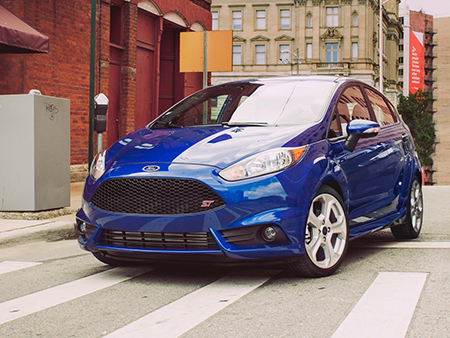 Ford Motor Co. announced today it will release more than 12 new performance vehicles through 2020. The announcement comes in tandem with the creation of the global Ford Performance team, which will unify Ford SVT, Team RS, and Ford Racing globally.

“Ford remains committed to innovation through performance,” says Raj Nair, Ford group vice president of global product development. “Our new global Ford Performance team ties together racing, performance vehicles, and parts. It will allow us to more quickly introduce products and accessories that meet the needs of customers around the world on-road and on the track.”

The vehicles include an all-new Focus RS — which first debuted in 1968 and was last introduced in 2009 — that will be available to customers in major markets around the world for the first time.

“To earn the RS badge, the vehicle has to be a no-compromise driver’s car that can deliver exceptional performance on the track when required while providing excellent every day driving,” Nair says.

Raj notes that performance vehicle sales are up 70 percent in the United States and 14 percent in Europe, when compared to 2009.

Ford’s ST lineup, for example, is attracting younger buyers. In the United States, more than 65 percent of ST customers come from outside the Ford brand, and more than 50 percent of Ford performance vehicle owners’ next vehicle purchase is a Ford. Millennials are purchasing ST vehicles at a rate twice that of other Ford-branded vehicles.

The performance organization will develop and test unique performance vehicles, parts, accessories, and experiences for customers, Raj says. This includes developing innovations and technologies in aerodynamics, lightweighting, electronics, powertrain performance, and fuel efficiency that can be applied more broadly to Ford’s product portfolio.

In addition to using racetracks around the world, the team will develop new vehicles and technologies at Ford’s engineering centers globally and at the new technical center in Charlotte, N.C. The facility will help the team deliver racing innovations, as well as advance tools for use in performance vehicles and daily drivers alike.

“Ford still races for the same reasons Henry Ford did in 1901 — to prove out our products and technologies against the very best in the world,” Nair says. “The Ford Performance team will continue to pursue performance innovation, ensuring we can deliver even more coveted performance cars, utilities, and trucks to customers around the world.”

In related news, Ford is rebranding its MyFord Touch touch-screen infotainment system for a newer version called Sync 3. The new system uses BlackBerry’s QNX in-vehicle operating system, rather than Microsoft technology. It is expected to be introduced for the 2016 model year.