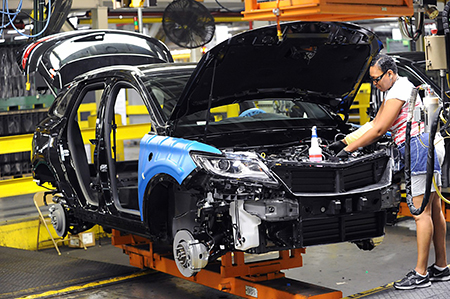 Ford Motor Co. will hire 300 new employees and invest $129 million in its Louisville Assembly Plant in Kentucky to support the production of the 2015 Lincoln MKC.

The MKC — the second of four all-new Lincoln vehicles being introduced by 2016 — began production in May and nearly 2,900 units have been sold as of the end of July.

The MKC is the brand’s initial entry in the small premium utility segment, which has experienced more than 600 percent growth since 2008, with nearly 300 percent growth projected between now and 2018. The vehicle will go on sale in China, along with the MKZ sedan, when the Lincoln brand debuts there later this year.

In 2010, Ford invested $600 million in Louisville Assembly Plant to transform it into a modern, flexible facility with tooling and facility upgrades in its final assembly area and body shop. This transformation allows for the production of multiple vehicle models at the same time, without requiring downtime for tooling changeover.

With the addition of the 300 employees, Ford is more than 75 percent toward its goal of creating 12,000 hourly jobs in the United States by 2015.