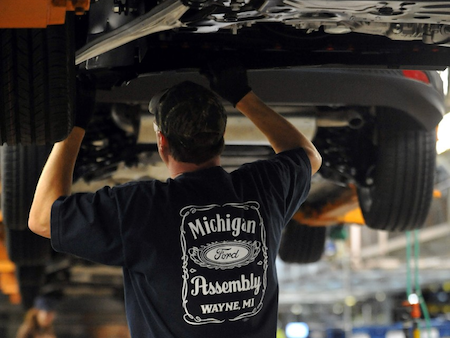 Dearborn automaker Ford Motor Co. today announced a $1.2 billion investment in three Michigan manufacturing facilities to strengthen its role in the truck and SUV market, and support the company’s expansion from an automotive enterprise to a mobility company.

“At Ford, we are investing aggressively in building on our strengths today — including trucks, vans, commercial vehicles, performance vehicles, and SUVs — while at the same time growing our leadership in electrification, autonomy, and mobility services,” says Joe Hinrichs, Ford president, The Americas. “As America’s top producer of automobiles, we are proud to be going even further in our commitment to invest in manufacturing here at home.”

Ford will invest $850 million to retool the Michigan Assembly Plant in Wayne to build new Ford Rangers and Broncos, which were highlighted during the automaker’s press unveiling at the 2017 North American International Auto Show at Cobo Center in Detroit in January.

Work on the plant will begin in May and employees will begin building the Ranger at the end of 2018, and the Bronco in 2020. The company also plans to create or retain 130 jobs and invest $150 million to expand capacity for engine components for several vehicles, including the Ranger and Bronco, at its Romeo Engine Plant. The improvements will begin in early 2018.

The Michigan Strategic Fund approves of Ford’s investment, and put out a release Tuesday to show its support.

Additionally, Ford plans to invest $200 million for an advanced data center, which will support the company’s shift to a mobility company. It is the second of two new data centers the company is building in Michigan, as Ford expects data usage to increase 1,000 percent as manufacturing, business needs, new mobility services, and the autonomous and electrified vehicle markets continue to grow. Ford’s data storage requirements are expected to increase from 13 petabytes today to more than 200 petabytes in 2021.

The second data center will be located at Ford’s Flat Rock Assembly plant, where the company previously invested $700 million and added 700 jobs in January, to create a factory capable of producing high-tech electrified and autonomous vehicles. Currently, the Flat Rock plant is responsible for producing the Mustang and the Lincoln Continental.

Over the past five years, Ford has invested $12 billion in its U.S. plants and created a total of 28,000 jobs.