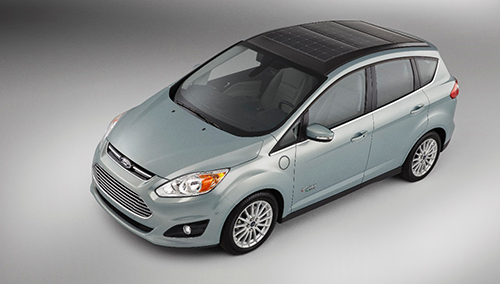 tFord Motor Co. will debut its C-MAX Solar Energi Concept at the 2014 International Consumers Electronics Show in Las Vegas next week. The solar-powered concept car uses a special lens — originally developed for use in lighthouses — to magnify sunlight and direct it to the vehicle’s solar panels and recharge the car’s battery.

t“Ford C-MAX Solar Energi Concept shines a new light on electric transportation and renewable energy,” says Mike Tinskey, Ford global director of vehicle electrification and infrastructure. “We want to further the public dialogue about the art of the possible in moving the world toward a cleaner future.”

tThe vehicle’s patent-pending system tracks the sun as it moves from east to west, drawing enough power from the sun each day to equal a four-hour battery charge. With a full charge, the concept car is estimated to have the same total range as a conventional C-MAX Energi of up to 620 miles.

tIf desired, the vehicle has a charge port, and can be charged by connecting to a charging station via cord and plug so that drivers have the option to power up via the grid.

tThe concept car is a collaborative project of Ford, San Jose, Calif.-based SunPower Corp., and Atlanta-based Georgia Institute of Technology. After CES, Ford and Georgia Tech will begin testing the vehicle in numerous real-world scenarios. The outcome of those tests will help to determine if the concept is feasible as a production car.