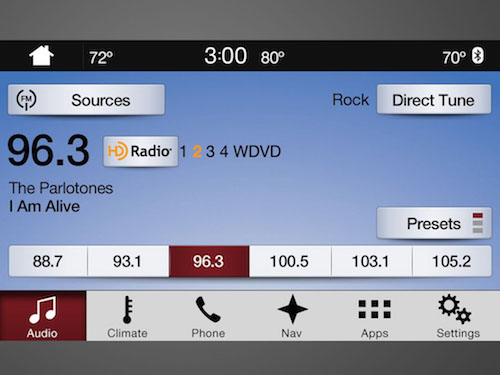 Dearborn-based Ford Motor Co. will debut a new HD radio technology on its Sony audio systems for the 2017 Escape and Fusion. This technology marks one of the industry’s first applications of dual reception for HD radio, which uses a special receiver to broadcast a digital signal over a traditional radio.

The vehicle’s new dual FM radio reception will use a second receiver and the rear window heater grid as a second antenna to help the radio choose between weak and overlapping signals.

“With dual antennas, the broadcast transitions seamlessly,” says Andy Adrian, antenna and reception engineer for Ford. “No spits or wisps, and no hearing two radio stations at the same time.”

Other audio improvements for the 2017 Escape and Fusion include the addition of Automotive Audio Bus technology, a lightweight transceiver designed by Analog Devices Inc., that helps deliver high-fidelity sound.

The 2017 Fusion’s V6 Sport, Platinum, Hybrid, and Energi models, along with the SE Luxury Package, are also equipped with acoustic laminated glass on the windshields and front doors, which blocks out wind and road noise.

The number of speakers on the Fusion Hybrid S and Hybrid SE models is also increasing from six to nine.

“It’s about attention to detail,” says Alan Norton, senior technical leader for Ford audio systems. “By improving radio reception and taking over steps to improve sound quality and acoustics, we aim to give customers the consistent, enjoyable sound they deserve.”