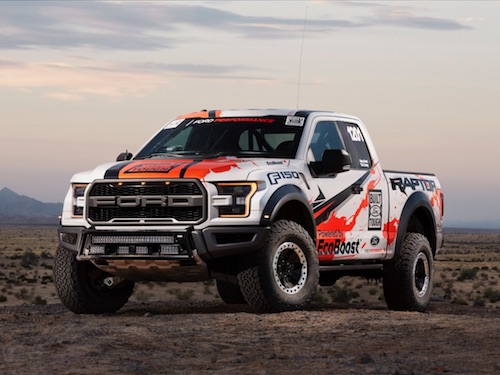 The factory-spec Raptor springs and Fox Racing shocks were also revised to accommodate the added weight from the safety cage and fuel cell.

Foutz has run the new Raptor in several Best in the Desert events in 2016, including the most recent 645-mile General Tire Vegas to Reno race in August, which he completed in 15 hours.

“The (F-150 Raptor) stock engine, transmission and powertrain calibrations are phenomenal,” he says. “Suspension-wise, everything else – including its wheels and BFGoodrich K02 tires – is carried over from the 2017 production model.”

Ahead of the race, the Ford Performance-supported F-150 Raptor will be on display at the 2016 SEMA show in Las Vegas from Nov. 1-4.

The project, which is expected to be featured in the Ford Explorer, Expedition, and Mustang models in fall 2016, consisted of the creation of a high quality, reliable navigation solution that is tailored to complement the Ford brand in-car experiences across seven select regions around the world.

Special local features are included in the system to cater to the needs of each market, such as a Makkah finder available in Arabic regions and full off-road support in Africa. The software also handles local languages, is integrated with the vehicle’s infotainment system, and features nearby fuel station availability.