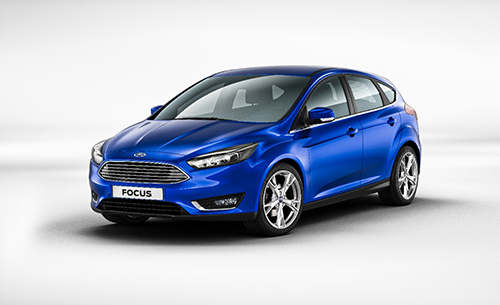 Ford Motor Co. unveiled the 2015 Ford Focus, which features new exterior and interior designs as well as advanced technologies including a lane keeping assist system, on Sunday at the Mobile World Congress in Barcelona.

“We have taken the title of world’s best-selling nameplate to impressive new heights with the redesigned Focus,” Joe Hinrichs, Ford’s executive vice president and president of The Americas, said in a statement.

The new Focus employs a 2.0-liter GDI I-4 engine, which delivers an EPA-estimated rating of 40 miles per gallon on the highway. Buyers can also opt for a 1.0-liter EcoBoost engine with a six-speed transmission, currently available in the Ford Fiesta (EPA estimated 45 mpg on the highway).

On the outside, the new Focus features a restyled hood, grille, and trunk lid, in addition to signature lighting for the headlamps, tail lamps, and new rear lamp clusters, along with a restyled trunk lid. Inside, there’s satin chrome detailing, new seat trims, switches, and an available heated steering wheel.

The new model includes a rearview camera and an available Blind Spot Information System and lane-keeping system. As a result, the vehicle can warn a driver when a vehicle enters the defined blind spot zone and apply steering torque if the driver does not correct an unintended lane departure.

In addition, the 2015 Focus offers suspension and chassis upgrades to reduce interior noise while offering better handling between a driver and the road.

Available in four- and five-door versions, the 2015 Focus will go on sale in the second half of 2014. Pricing has yet to be announced.