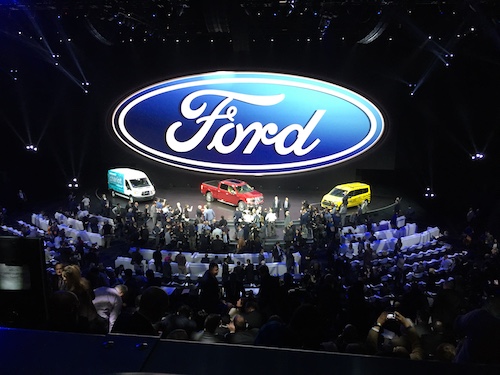 Ford Motor Co. executives say they’ve heard their customers “loud and clear” and have plans to return the Bronco — a mid-size SUV and sport utility vehicle — to its North American lineup in 2020 today at the North American International Auto Show in Detroit. The Dearborn-based automaker also announced the revival of the Ranger midsize pickup truck for the same market in 2019, and both vehicles will be manufactured at the company’s assembly plant in Wayne., Mich.

“Ranger is for truck buyers who want an affordable, functional, rugged and maneuverable pickup that’s Built Ford Tough,” says Joe Hinrichs, Ford’s president of the Americas. “Bronco will be a no-compromise midsize 4×4 utility for thrill seekers who want to venture way beyond the city.”

“This year, the expansion of our business as an auto and mobility company moves into even higher gear,” says Mark Fields, president and CEO. “We’re introducing even more new vehicles and technologies to make life better for millions of people in the near term, plus we’re presenting a vision and partnering with cities to move more people even more efficiently in the future.”

These announcements are on the heels of the company’s decision to invest $700 million in NextGen vehicle production at its Flat Rock facility, disrupting initial plans to build an assembly plant in Mexico.

Fields says the announcements give momentum to Ford’s efforts to evolve as an auto and mobility company, in addition to the unveiling of the brand’s new F-150 pickup, the presentation of their vision for the “City of Tomorrow” and its acquisition of the Chariot ride-sharing service. Fields says Ford’s new vehicles and technologies aim to help millions of people live more efficiently in the short and long term.

Fields also shared some industry-projections and says the company will focus on autonomous and connected vehicle technology as that field continues to evolve. Within the next five years, Ford expects autonomous vehicles to be introduced in cities around the world, including the company’s first fully autonomous vehicle in 2021. They also project significant growth in electrified vehicles, with global EV offerings outnumbering gasoline-powered models globally in the next 15 years.

Ridesharing programs are also anticipated to play a major role in the future of transportation, including Chariot, Ford’s newly-acquired app-based program operating in San Francsisco, Calif. and Austin, Texas. The program is expected to expand to at least seven cities nationwide and one internationally in the coming year.