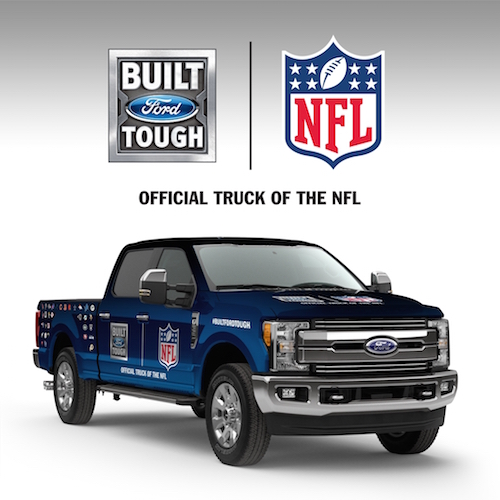 Dearborn-based Ford Motor Co. has entered into a three-year partnership with the National Football League, which designated the company’s F-Series trucks as the Official Truck of the NFL.

As part of the partnership, Ford will bring its Built Ford Tough Tailgate Tour — an on- demand, tailgating service — to NFL games around the country, offer tickets to Super Bowl LI, and gift a new NFL-customized 2017 Ford F-Series Super Duty through its Built Ford Tough Toughest Ticket sweepstakes. The automaker also will launch a Built Ford Tough Offensive Line of the Year award.

Former NFL lineman Shaun O’Hara, an NFL Network and NFL.com analyst, will use statistical analysis, positional expertise, and knowledge of assignments to determine an offensive line of the week throughout the upcoming football season. At the end of the season, one lineman will be recognized as the Built Ford Tough Offensive Line of the Year at the annual NFL honors awards presentation.

“Both brands — each a leader in its category and known for toughness, capability, excellence, and innovation — are coming together to give fans exclusive access to events and games, and to highlight players in a new way,” says Mark LaNeve, vice president of U.S. marketing, sales, and service for Ford.

The partnership kicks off today in New York City, where Ford is offering consumers access to tailgate trucks through Uber, tailgate food, game tickets, and merchandise.