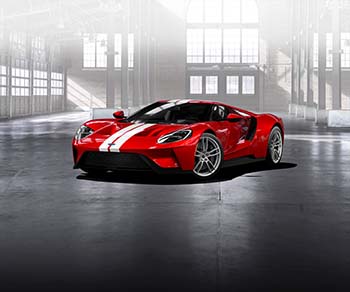 Dearborn-based Ford Motor Co. is taking applications for the Ford GT high-performance supercar, which will have a starting price around $450,000. Production is limited to 250 vehicles per year.

“The purchase process for the Ford GT is as unique as our all-new supercar,” says Henry Ford III, global marketing manager of Ford performance, and a great-great grandson of automotive pioneer Henry Ford. “We understand GT customers are strong ambassadors for Ford Motor Co., and we look forward to providing them a service as distinct as the car itself.”

Ford says approved applicants will work with the Ford GT Concierge Service for a personalized purchase experience. The vehicle comes equipped with a 3.5-liter V6 engine that produces more than 600 horsepower. He says eight exterior colors can be paired with one of seven different stripe colors.

Ford III says the initial ordering period will cover the first two years of production, with 500 vehicles produced in that time. Applicants must apply for a Ford GT by May 12.

IN RELATED NEWS, the automaker announced a 10-year plan to transform its Dearborn headquarters and engineering center into a more modern, high-tech campus, which was first reported in the July/August issue of DBusiness magazine. The majority of the work is expected to be complete by 2023.

“As we transition to an auto and a mobility company, we’re investing in our people and the tools they use to deliver our vision,” says Mark Fields, president and CEO of Ford. “Bringing our teams together in an open, collaborative environment will make our employees’ lives better, speed decision-making, and deliver results for both our core and emerging businesses.”

Fields says the new headquarters will consolidate 30,000 employees from 70 buildings into primarily two locations — a product campus and a world headquarters campus. He says more than 7.5 million square feet of workspace will be rebuilt.

Ford’s current research and engineering center campus houses 12,000 employees. Fields says the new campus will offer 4.5 million square feet of workspace for 24,000 employees, which will include a central green area that links buildings with walking trails and connected facilities, complemented by on-demand shuttles and autonomous vehicles.

Renovations of the current Ford World Headquarters will begin in 2021 and will include more than 1.3 million square feet of reworked space and a new Ford Credit facility that provides onsite employee services.

Detroit-based SmithGroupJJR designed the new campus layout. For more on Ford’s Dearborn campus, read Next Generation from the July/August 2015 issue of DBusiness magazine.â€‹