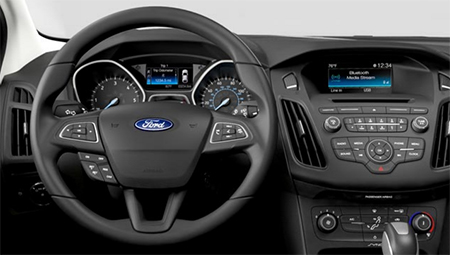 “SYNC, Ford’s entertainment and communications system, was designed to be flexible and updatable, just like other mobile technologies, so our customers are able to get the most out of their smartphones while behind the wheel,” says Sherif Marakby, director of electronics and electrical systems engineering at Ford.

Marakby says the new offering allows drivers to activate Siri, Apple’s avatar by pressing the voice recognition button on the steering wheel. From there, drivers can make phone calls using the contacts in their address book; look up phone numbers for restaurants, businesses, and other points of interest; set an alarm; ask about the weather; select and play music; audibly send and receive text messages; and get directions through Apple Maps.

“Siri Eyes-Free is another great voice-activated feature that not only adds convenience but helps our customers keep their eyes on the road and hands on the wheel.”

The new software update is available for vehicles equipped with the second generation of SYNC, also known as MyFord Touch, ranging from model years 2011 to 2016.

The downloadable update is available at Owner.Ford.com.