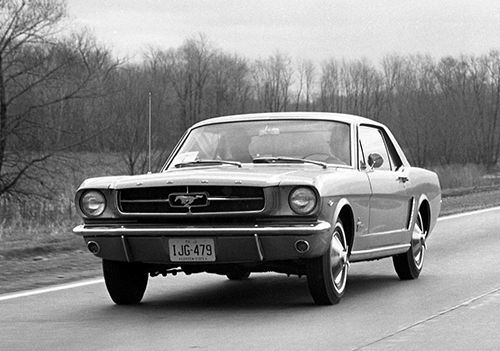 On July 11, the Mustang Owners Club of Southeastern Michigan will host the Mustang 50th Anniversary Celebration at the Michigan International Speedway in Brooklyn, says the organization’s president, Mike Rey, although the pony car will be feted at dozens of events this spring and summer.

“Last year, we had over 1,000 cars — just Fords and Mustangs,” at the Mustang Memories event at the Ford World Headquarters in Dearborn, says Rey, who owns a 1993 Mustang GT convertible and a 2005 Mustang GT fastback. “This year, we’re anticipating about 1,500 vehicles” on Aug. 17 in Dearborn.

Rey says the organization will host a Mustang Heroes Banquet on Aug. 15, when the club will honor those who influenced the brand over the past 50 years, from original design team members to current engineers. For more information about the events, visit mocsem.com.

In addition, the annual Woodward Dream Cruise will host the 2014 Mustang Alley Aug. 16 on E. 9 Mile Road, from Woodward to Hilton. While registration is not yet open, the Ferndale event will draw an expected 750 participating vehicles, says Michael Lary, Ferndale’s special events director.

The Mustang Club of America, meanwhile, will host an anniversary event on April 16-20, following the “Pony Drives,” which kick off earlier that week. On April 13, Mustang owners will depart Norman, Okla. and caravan to one of two destinations: the Charlotte Motor Speedway or Las Vegas Motor Speedway.

“The official Mustang 50th anniversary celebration will kick off in the middle of the country so people can enjoy these pony cars as they were intended to be used, ‘on the road,’” said Ronald D. Bramlett, executive director of the Mustang 50th Birthday Celebration. “We believe this will be the largest group of Mustangs traveling together in the world.”

Those planning to participate in one of the drives can find the registration form at mustang50thbirthdaycelebration.com.

Detroit-based Shinola was among the first to recognize the Mustang’s anniversary when it unveiled a commemorative watch last March. It was one of 50 companies to be licensed to create a product featuring the Mustang’s 50 year logo. To see or purchase the watch, priced at $700, click here.

Most recently, OPI Products announced that it would base a limited-edition nail polish line, to launch internationally in July, off of the Mustang’s 50-year history. The name of the collection’s hero shade? Race Red.