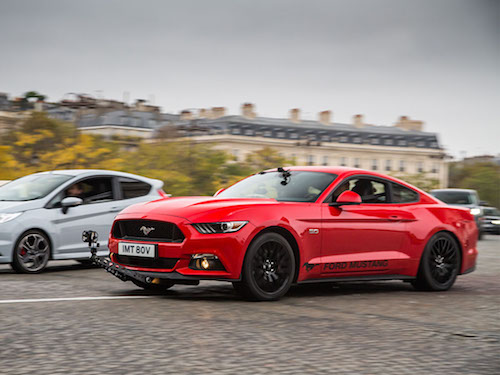 With 360 and virtual reality technology, French filmmaker Claude Lelouch used the Ford Motor Co. Mustang to put a 21st Century spin on a classic nine-minute film, called C’était un Rendez-Vous. The Mustang in the film is a 5.0 litre V8 fastback.

The original 1976 film depicts a driver racing through the streets of Paris for a date that can’t wait, and the “Re-Rendez-Vous” follows a similar route past familiar landmarks such as the Arc de Triomphe, Sacré Cœur Basilica, and Montmarte.

No stranger to using Mustangs on film, Lelouch received an Oscar for the 1966 movie, “A Man and a Woman,” where the main character droves a white Mustang in a Monte Carlo rally.

“I had goose bumps watching ‘C’etait un Rendez-Vous’ 40 years later in virtual reality. At the time, my movie was about the feeling of freedom and the pleasure driving generates,” says Lelouch. “I knew that Ford would do more than just a tribute to the original in this new version. I am delighted to see the Mustang again and to close the loop 50 years after ‘A Man and a Woman.’”

Recreating the routes from the original film was a challenge, as some of the original routes having disappeared. The film is scheduled to air later this month and can be viewed in 360 on mobile devices or using a virtual reality headset. There are plans for the film to also be shown online via an expandable banner, a virtual reality first.

“Mustang is a symbol of the freedom and thrill of driving. Recreating Lelouch’s cult short film ‘C’etait un Rendez-Vous’ was the perfect way to capture this spirit for a new audience,” says Anthony Ireson, director of marketing communications for Ford of Europe.

The film can also be viewed here.