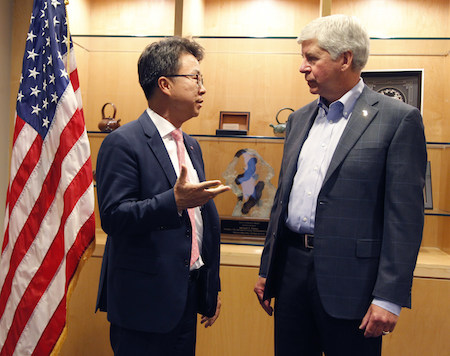 Among several deals announced today by Michigan Economic Development Corp., Ford Motor Co. plans to invest $350 million to add a new transmission to its lineup at its Livonia Transmission Plant. The automaker had evaluated other sites for the project, including neighboring states and Mexico.

In addition, MEDC today announced Southfield-based Lear Corp. plans to invest $29.3 million to build a 160,000-square-foot automotive seat plant in Flint, and add 435 jobs, at the former site of an administrative building at Buick City

“We are proud to be growing in our home state and keeping manufacturing jobs in America,” said Ray Scott, executive vice president and president of Lear’s seating operations. “This expansion of capacity reflects the positive outlook we have for our business, and will contribute to the revitalization of Flint.”

Penske Logistics, part of Penske Corp. in Bloomfield Township, plans to invest $98.6 million to build a 606,000-square-foot storage and distribution center in Romulus, and add 403 jobs.

“This project has been made possible because of teamwork with the MEDC, the city of Romulus, InSite Real Estate, and Bonner Advisory Group,” said Doug Studley, director of operations at Penske Logistics. “We look forward to investing in Romulus and bringing over 400 jobs to the city.”

The project will create 292 new jobs, including factory workers and engineers in Hazel Park, and engineering positions at the expanded LG research and development center in Troy.

Representing an LG investment of approximately $25 million, the project is supported by a $2.9 million capital grant under the Michigan Business Development Program over the next four years. The company will also receive hiring and training assistance from the state, including MI Works support in cooperation with local community colleges, and from the cities of Hazel Park and Troy.

“When leading global companies like LG Electronics invest in Michigan and create hundreds of good, high-paying jobs here, it speaks volumes about the strong business and mobility climate in the state today,” says Michigan Gov. Rick Snyder. “LG’s great technological advancements and our outstanding workforce will help pave the way for the vehicles of the future right here in Michigan.”

LG’s first-half 2017 global revenue for vehicle components were more than $1.5 billion, a 43 percent increase year-over-year compared to 2016, due in part to a collaboration with General Motors Co. on the Chevrolet Bolt EV.