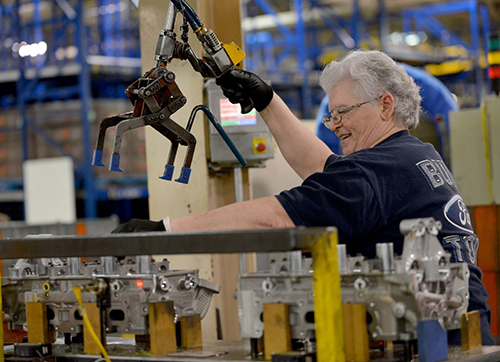 Ford Motor Co. today announced plans to invest $500 million to upgrade its engine plant in Lima, Ohio to increase production of the 2.7-liter EcoBoost engine for the 2015 Ford F-150.

Ford will add 300 jobs at the plant to manufacture the latest EcoBoost engine — a high output, twin-turbo, 2.7-liter V-6 EcoBoost— to meet consumer demand, officials say. So far, more than 57 percent of consumers who have purchased the 2014 F-150 have opted for a V-6 engine.

“Our truck customers have spoken, and we continue to meet their evolving needs by providing another V-6 option in the all new 2015 F-150,” says Joe Hinrichs, president of the Americas for Ford. The new model, which will feature a body made almost entirely of aluminum, will be built at the Dearborn Assembly Plant at the Rouge complex and a plant in Kansas City, Mo.

The investment in the Lima location will support a new flexible engine assembly system as well as the renovation of a 700,000-square-foot space for machining and assembly functions.

Looking ahead, the company plans to shift production of the Ford F-650 and F-750 from Mexico to the Ohio Assembly Plant in Avon Lake, near Cleveland, early next year.