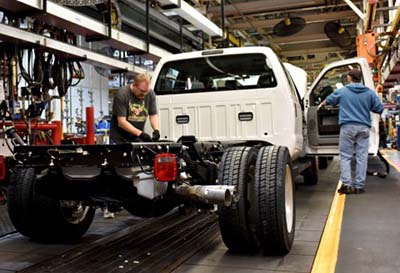 Dearborn-based Ford Motor Co. today announced it will create 2,000 new jobs and invest $1.3 billion at its Kentucky Truck Plant in Louisville. The investment will support the launch of the all-new 2017 Ford F-Series Super Duty truck.

“With the introduction of the all-new Ford Super Duty … we expect to continue growing our truck leadership,” says Joe Hinrichs, Ford president of The Americas. “Through this investment, we are continuing to show our commitment to Kentucky and the city of Louisville.”

Hinrichs says Ford is investing $1.3 billion in a new body shop, facility upgrades, and retooling to build the new aluminum-bodied truck. The 2017 F-Series Super Duty pickup has a high-strength steel frame, an aluminum-alloy body, seven cameras for ease in viewing towing, and a selection of gasoline or diesel engines.

The Kentucky Truck Plant produces the F-250, F-350, F-450, and F-550 Super Duty pickups and chassis cabs, as well as Ford Expedition and Lincoln Navigator. In 2014, Ford invested $80 million in the plant and added 350 jobs to increase capacity at the plant to produce more F-Series Super Duty trucks.

Hinrichs says the plant has produced more than 5 million Ford F-Series Super Duty trucks since it was introduced in 1999. Hinrichs says in the past two years, Ford has invested more than $1.5 billion in Kentucky and Louisville.