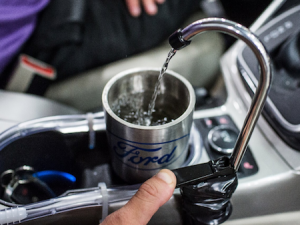 Two of Dearborn automaker Ford Motor Co.’s engineers developed the idea for On-The-Go H20, a system that collects condensation from vehicle air conditioners. Once the fluid is collected, it is run through a filter and then pumped into a faucet located inside the car to provide drinking water.

On-the-Go H20 was developed by Ford engineers Doug Martin and John Rollinger, who first had the idea that a car could be a source of water.

“A couple years ago, I was reading a document that described a billboard in Lima, Peru that condensed water out of thin air in this dry environment and made 2,500 gallons in three months and dispersed it to the residents that didn’t have access to clean water,” says Martin. “I thought, cars go through air too, so why not do something with cars like that?”

Martin adds that he sees the project as a benefit for developing countries, and that if all cars had it, they could run water through the system to make it suitable for drinking.

On-the-Go H2O was one of over 6,000 inventions pitched by Ford employees over the past year, an increase in innovation attributed to more than 3,500 first-time inventors submitting their ideas.