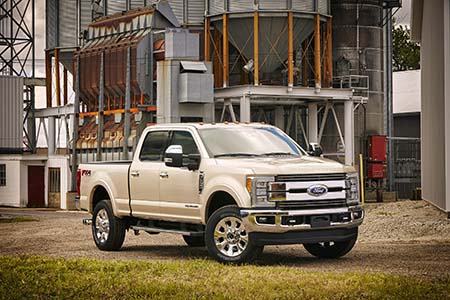 The truck’s frame is made up of more than 95 percent steel, which Ford engineers say is 24 times stiffer than the previous frame. The body uses aluminum alloy, which is more dent- and ding-resistant than the outgoing steel body. It also prevents red rust corrosion.

In addition, the steel and aluminum alloy help to reduce the vehicle’s weight by up to 350 pounds.

Schmatz says a center, high-mounted stop lamp camera will offer visibility into the cargo box, allowing for easier hook-up of gooseneck (a hook that uses a ball and coupler) towing and fifth-wheel towing. A trailer camera is also available to improve rear visibility, especially when backing up.

There are five models in the Super Duty lineup — XL, XLT, Lariat, King Ranch, and Platinum. The vehicles, set to go on sale late next year, will most likely be on display at the North American International Auto Show in January at Cobo Center in downtown Detroit.