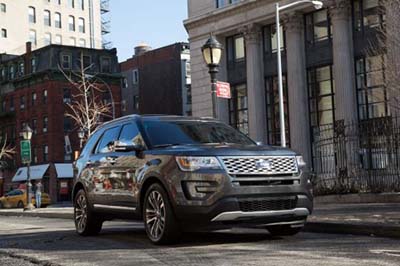 Ford Motor Co. and FCA US LLC both reported single digit sales increases in April compared to the same month last year, due to an uptick in sales of SUVs and pickup trucks, while General Motors Co. posted a 4 percent decrease in sales.

“We saw strong consumer demand in April, especially for pickups,” says Mark LaNeve, vice president of U.S. marketing, sales, and service at Ford. He says the automaker had a 4 percent increase in sales in April (231,316 units). “F-Series has moved past the quarter million sales mark year to date — the strongest start for F-Series in a decade, while Ford brand SUVs are having their best year ever.”

FCA reported a 6 percent increase in sales in April (189,027 units) when compared to the same month last year, marking the automaker’s best April sales in 11 years.

Bigland says seven FCA US vehicles set records in the month of April, including the Jeep Renegade and Jeep Compass, each posting their best monthly sales ever. Additionally, the Jeep Wrangler, Jeep Patriot, Ram pickup truck, Ram ProMaster, and Ram ProMaster City each recorded their best April sales ever.

“GM’s retail growth over the last 12 months has outpaced the industry by a wide margin because our redesigned large pickups and SUVs are hits, we made smart investments in new segments like small crossovers and mid-size pickups, and our momentum in the car business is accelerating with each new model introduction,” says Kurt McNeil, U.S. vice president of sales operations at GM. “GM bucked the industry trend with flat year-over incentives, we are managing with lean inventories and our commercial and government fleet business is growing.”