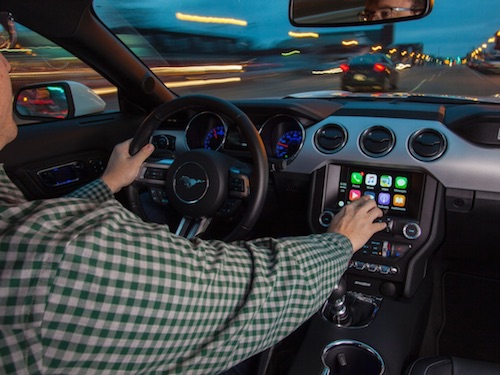 Dearborn-based Ford Motor Co. has expanded its SYNC 3 connectivity platform, a voice-activated communications and entertainment system with smartphone integration. It will now offer the technology in its entire lineup of 2017 cars, SUVs, light trucks, and electric vehicles.

“We developed one platform — SYNC 3 — and have been able to quickly offer the technology across our lineup,” says Chuck Gray, Ford Global Director, Electrical and Electronic Systems Engineering.

SYNC 3 will feature new hardware and software, as well as over-the-air technology updates via WiFi.

The expansion will also include access to apps such as Spotify, Pandora, FordPASS, AccuWeather, and AAA member services through the system’s SYNC AppLink.

Apple CarPlay, which allows drivers to use their iPhone interface on a vehicle’s touch screen to access Siri voice controls, maps, music, phone, messages, and more, has also been added to the system.

Android Auto is also available with the update, and delivers Google Maps and music to a car’s screen while enabling voice controls for phone calls and messaging.

“Ford is not taking the traditional approach of introducing Apple CarPlay and Google Android Auto on a few piecemeal models or as an expensive option on luxury vehicles only,” says Jeffrey Hannah, director of North America for global automotive technology research firm SBD. “If you buy any 2017 Ford vehicle with SYNC 3, you drive off the lot with both of these innovative technologies ready to go.”

Ford launched its Ford Developer Program in 2013 to expand its creation of vehicle technologies. As part of the program, the company recently released a software platform for smartphone app developers with the goal to make it easier and more cost efficient to develop in-car apps compatible with SYNC 3.