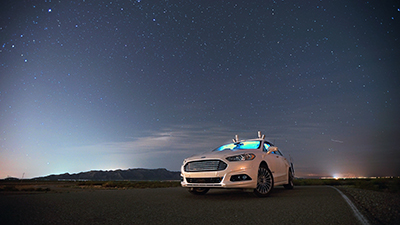 As Ford Motor Co. works to develop a fully autonomous vehicle, its Ford Fusion autonomous research vehicle has reached an important milestone — driving at night with no headlights on, using only the car’s virtual driver software.

“Thanks to LiDAR (a laser light that measures distance), the test cars aren’t reliant on the sun shining, nor cameras detecting painted white lines on the asphalt,” says Jim McBride, technical leader for autonomous vehicles at Ford. “In fact, LiDAR allows autonomous cars to drive just as well in the dark as they do in the light of day.”

McBride’s says Ford’s self-driving car used high-resolution maps — with information on the road, road markings, geography, topography, and landmarks like signs, buildings, and trees — to navigate in the dark at Ford’s proving grounds in Arizona.

“As I rode in the back seat, I was following the car’s progression in real time using computer monitoring,” says Wayne Williams, research scientist and engineer at Ford. “Sure enough, it stayed precisely on track along those winding roads.”

McBride says this year, Ford will triple its autonomous vehicle test fleet — bringing the number to about 30 self-driving Fusion Hybrid sedans for testing on roads in California, Arizona, and Michigan.