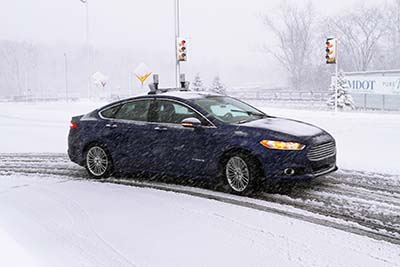 As Dearborn-based Ford Motor Co. develops its autonomous driving technologies at the University of Michigan’s M City proving grounds in Ann Arbor, the automaker today announced details about the technologies that will allow its vehicles to drive autonomously on snow-covered roads.

To begin the process, Wayne Williams, an engineer for Ford’s autonomy team, says one of its Ford Fusion Hybrid autonomous vehicles will drive a prescribed route in ideal weather conditions, creating a high-resolution 3-D digital map.

The resulting map can then be used as a baseline to identify a car’s position when driving in autonomous mode. He says the car will be able to locate itself within a mapped area even when the road is covered in snow.

Williams says Ford’s LiDAR sensors, an advanced driver assistance system that offers sensing ranges up to more than 600 feet, generate enough laser points that some can bounce off falling snowflakes or raindrops, returning the false impression that there’s an object in the way. He says Ford, in collaboration with U-M researchers, created an algorithm that recognizes snow and rain so autonomous vehicles don’t steer around precipitation.

He says in addition to the LiDAR sensors, Ford uses cameras and radar to monitor the environment around the vehicle, offering 360-degree situational awareness. The data generated from all the sensors is fused together in a process known as sensor fusion. Williams says one inactive sensor — perhaps caused by ice, snow, grime, or debris buildup on a sensor lens — doesn’t necessarily hinder autonomous driving.

“Because of the extensive development work, we were confident the car would do exactly what we asked of it (when testing it in snowy conditions),” Williams says.

He says Ford is the first automaker to publicly demonstrate autonomous vehicle operations in the snow.