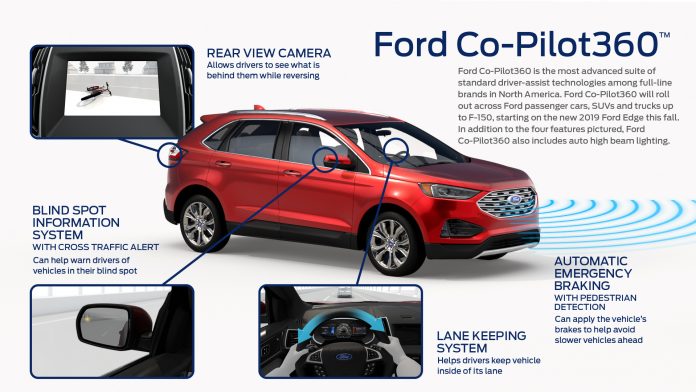 Ford Motor Co. in Dearborn today announced its Ford Co-Pilot360, which it touts as the most advanced suite of standard driver-assist technologies among full-line brands, aims to help people around the world more safely and confidently face congested roads.

“Though our vehicles today are safer than ever, drivers tell us they are still stressed about getting in a potential accident,” says Jim Farley, Ford president of global markets. “That’s one reason why we’re making these must-have technologies accessible to millions of customers each year.”

Ford Co-Pilot360 starts with standard automatic emergency braking — called pre-collision assist with pedestrian detection —that can help drivers avoid collisions with other vehicles, or pedestrians who might accidentally cross in front of the vehicle’s path. If a potential collision is detected, a warning flashes and an alert sounds, and if the driver’s response is not sufficient, the system can automatically apply the brakes to help minimize a frontal collision.

The technology addresses Ford research showing a growing trend of people worrying about hitting pedestrians. Plans are to have the offering be a standard feature on 91 percent of Ford vehicles in North America by 2020.

In turn, the blind spot information system, or BLIS, uses radar to identify a vehicle entering the blind spot and alerts the driver with an indicator light in the side-view mirror. Cross-traffic alert can warn drivers of traffic behind when slowly backing out of a parking spot or driveway.

A National Transportation Safety Board study shows having technologies such as AEB can help prevent and mitigate rear-end crashes, which can help customers lower their cost of ownership.

“Our commercial customers trust our trucks to get the job done,” Farley says. “And soon, we’ll be giving them another reason to trust us even more.”

Ford will continue to introduce new driver-assist technologies. Next year, it plans to debut in North America and Asia Pacific automatic emergency braking for when drivers are in reverse.

The company also is investing $500 million in the next five years to continue developing new driver-assist and safety technologies. Key areas of focus will be simplifying the technologies so they work as people expect – especially as driving controls become more automated.

Researchers test the user experience with many new technologies at Ford’s VIRTTEX driving simulator in Dearborn, and run new systems through a battery simulations built from more than hundreds of thousands of miles of testing across the country. For example, engineers tested a recent suite of radar and camera technologies for more than 660,000 miles across the globe.

This work also will help people become more comfortable with the idea of autonomous vehicles.

“Many people question the idea of autonomous vehicles,” Farley says. “But those who use advanced driver-assist technologies today say they are more open to cars doing all of the driving in the future.”