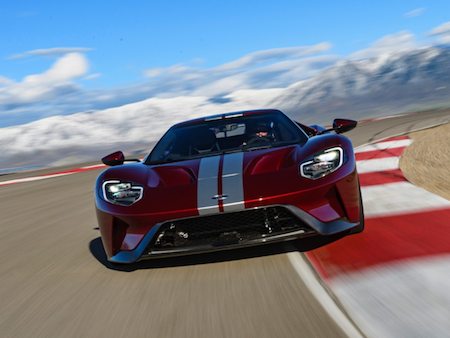 Designers and engineers at Dearborn’s Ford Motor Co. designed the GT Supercar to win races, but also to serve as a test bed for new technologies and ideas for future vehicles across the company’s lineup.

Lessons learned from the GT Supercar’s production led to improvements in several other models, including the use of high-strength aluminum alloy in today’s Ford F-Series pickup trucks and the new Ford Expedition full-size SUV, which is hundreds of pounds lighter, and has better capability, performance, and fuel efficiency.

“Without this kind of integrated teamwork and combined organization, it would have been impossible to deliver the all-new Ford GT in its current form,” says Dave Pericak, global director of Ford Performance. “This kind of collaboration was critical to not only bringing Ford GT back to life but for experimenting with the kind of innovations needed to create the ultimate supercar.”

Ford Performance optimized the GT Supercar to be as aerodynamic as possible, while reducing drag and maximizing downforce, which helps give the vehicle stability and grip on the track while accelerating, cornering, and braking. The GT’s aerodynamics change on-demand to meet varying driving conditions, due to moveable elements in the body.

The supercar’s wing also includes new Ford technology — a patent-pending design that changes the shape of the airfoil for maximum efficiency when fully deployed.

Ford also worked with Multimac and DowAksa to utilize carbon fiber to deliver weight savings and a sleek body shape for the GT, which wouldn’t have been possible using traditional steel or aluminum.

Additionally, the all-digital dashboard technology and track mode showcased in the GT are currently available on the 2018 Ford Mustang, while the F-150 Raptor features Baja off-road mode, also inspired by the GT.