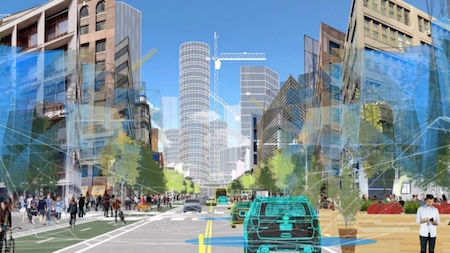 Jim Hackett, president and CEO of Dearborn automaker Ford Motor Co. gave the keynote address at the Consumer Electronics Show in Las Vegas this morning. During his speech, Hackett discussed the relationships between technology, disruption, and the future of mobility.

“Over the past century, the automobile turned out to be the ultimate disruptor to human’s lives and our civic way of life.

In one of his earliest ads, Henry Ford declared that he wanted to open the highways for all humankind. That idea, in action, gave us extraordinary new freedomâ€Š—â€Što travel great distances and to get around town like never before. This system at its inception had great attraction. It spawned new industries, thousands of new companies, and drove generations of personal and economic growth.

Yet, over time, as our towns and cities were designed around the automobile, roads overtook the community centers. Where people once gathered in the streets and town squares, there are now highways and multi-lane roads. Perhaps worst of all, time we used to spend with each other is now often wasted in congestion and traffic. Thirty years ago, we spent an average of 16 hours in traffic per year. Now, we spend 38 hours. The price we paid for the freedom to move was the creation of a world where roads were built for cars.

Today, the transport systems of most global cities have reached capacity. And yet, more and more of us seek the benefits of great urban centers. Faced with this rapid urbanization, and the pollution and congestion that comes with it, we have to admit that the model of the past is no longer tenable. It’s clear that we need to update cities to more efficiently move people and goods. In the process, we will improve the quality of life for all.

One of the most powerful solutions is to bring our streets into the sharing era and the sharing economy. New mobility technologies, created with people at the center, can help us share our streets in new ways, more equitably, providing more access, for more people, to everything our cities have to offer.

It’s ironic our streets have been left out of the sharing era since they were the original shared resource in urban areas. Before cars, city streets acted as bustling social hubs where neighbors and families could gather, vendors could sell their goods and children could play. Over time, parks and public spaces were sacrificed for parking lots and highways and cities came to be associated with social isolation. Streets comprise one-third of public land in our cities. By developing smart vehicles for a smart world, we can reverse this trend and return these valuable resources to the people.

Now is our opportunity to reclaim the streets for livingâ€Š—â€Što take major leaps in the direction of building a true City of Tomorrow and re-imagine how our streets and cities function much more efficiently. With the power of AI and the rise of autonomous and connected vehicles, we have technology capable of a complete disruption and redesign of the surface transportation system for the first time in a century. Everything from parking, traffic flow and goods delivery can be radically improvedâ€Š—â€Šreducing congestion and allowing cities to transform roads into more public spaces.

That is why Ford is taking a user-centered, systems-level design approach to mobility. We need to step back and look broadly at how the overall transportation operating system can help us all lead better, more productive lives. It is not good enough to just implement this new technology without first fully understanding how it is going to make people’s lives better. We need to get this new design right.

How do we do that? We have begun by collaborating with cities, civic organizations, urban planners, technologists and designers around the world to develop new ways of moving people and goods.

The challenge is enormous. We are talking about orchestrating the entire transportation network that is already woven into the fabric of our urban environments and civic life. But it is a task we must undertake because the old system is failing. We will re-affirm our shared humanity and build communities that inspire and support all of us. That is the kind of sharing economy we need. We look forward to sharing more at CES.”

More information on CES 2018 can be found here.