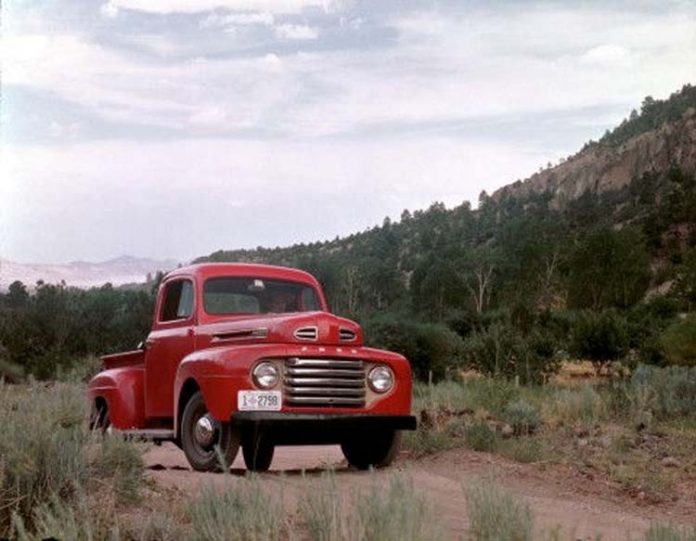 From the introduction of the Model TT in 1917 to this year’s F-150 Raptor, Dearborn automaker Ford Motor Co. is celebrating the 100th anniversary of the truck today. The F-Series is the nation’s best-selling truck for 40 consecutive years and best-selling vehicle for 35 straight years.

Nine years after the creation of the first Model T, Ford customers were asking for a vehicle that could haul heavier loads and provide greater utility for work and deliveries. On July 27, 1917, Ford responded with the Model TT which retained the Model T cab and engine. The vehicle included a heavier-duty frame capable of supporting one ton of payload and sold 209 units that year at $600 each.

“Model AA trucks in particular had a certain class to them,” he says. “Customers could use them on the farm, yet still take them to church on Sunday.”

Like the Model TT, the Model AA was available as a chassis cab offered in two lengths, with powertrain and axle options for increased capacity. To compete in an increasingly contested business, Ford replaced the Model AA with the Model BB in 1933. Many were outfitted as freight vehicles, ambulances, and stake trucked before the Model 50 was introduced two years later, powered exclusively by its Ford Flathead V8 engine.

By 1941, Ford had sold more than 4 million trucks, though war production resulted in a loss of consumer sales, but a gain in experience building military-grade truck chassis and four-wheel-drive personnel carriers.

“After the war, a lot of rural Americans moved to urban and suburban centers looking for work, and many took their Ford pickups with them,” adds Kreipke. “Ford saw this as an opportunity, and began work on the next generation of trucks for 1948, what came to be known as F-Series Bonus Built trucks.”

When the sixth generation F-series arrived in 1975, Ford dropped the F-100, replacing it with a higher capacity F-150 pickup to combat General Motors Co.’s C/K trucks. By 1997, F-series sold 26 million vehicles and pulled ahead in the sales race. The same year, a copywriter for Ford truck magazine was said to have penned the “Built Ford Tough” slogan, which is still in use today.

In addition to work vehicles, Kriepke adds that Ford trucks were becoming family vehicles, providing an alternative to renting a truck for moving or towing.

In 1982, Ford charted a different course with an all-new compact truck the Ranger, which is being reintroduced in North America in 2019 following a seven-year hiatus. In 1998, the company introduced the F-Series Super Duty, which was engineered for fleet and heavy-duty work use from the F-250 to F-750. As the lineup continued to expand, Ford added high-end trim and technology packages to meet customers’ diverse needs. Upgrades included the King Ranch, Platinum, and Limited model trucks, which provided more luxury content, improved functionality, and capability. Other features included leather-trimmed seating, SYNC with navigation, sunroofs and heated seats, and towing ratings in the 15,000-pound range.

Efficiency capabilities were introduced in 2011, including the EcoBoost V6 engine which provided customers with better fuel economy and power. This was followed by the first aluminum-alloy body for the 2015 F-150, providing customers increased efficiency and capability. This year, Super Duty trucks got similar lighter-weight, high-strength, military-grade, aluminum-alloy bodies, and Ford reinvested savings into towing and hauling capability.

“Ford trucks carried the loads, the people and the products necessary to get the job done,” says Kreipke.