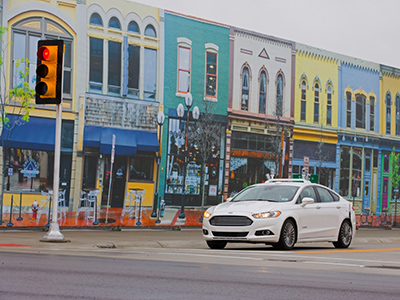 Ford Motor Co. today announced it is the first automaker to test autonomous vehicles at M City, a 32-acre facility designed to replicate a city environment located at the University of Michigan in Ann Arbor.

Nair says Ford has been testing autonomous vehicles for more than 10 years, but has expanded its testing to M City for its diversity of roads and realistic neighborhoods. He says the automaker is using its Fusion Hybrid to test the technologies, which include front-facing cameras, radar and ultrasonic sensors, and four sensors that generate a real-time 3-D map of the vehicle’s surrounding environment.

“The goal of M City is that we get a scaling factor,” says Ryan Eustice, an associate professor of engineering at U-M and a principal investigator in Ford’s research collaboration with the university. “Every mile driven there can represent 10, 100, or 1,000 miles of on-road driving in terms of our ability to pack in the occurrences of difficult events.”

Along with testing at M City and on public roads, Ford’s autonomous fleet is being tested at the company’s vehicle development facilities in Dearborn and Romeo.