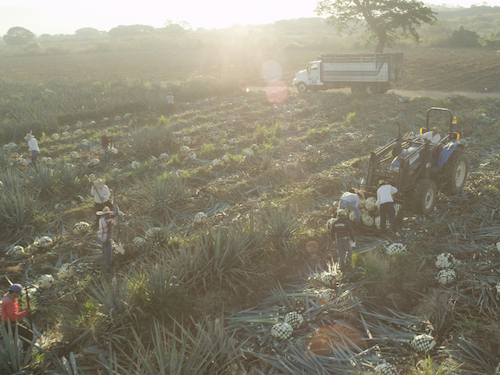 The companies are testing the durability and heat resistance of the new material, which could reduce vehicle weight and lower energy consumption. Targeted uses include interior and exterior components such as wiring harnesses, HVAC units, and storage bins.

“As a leader in the sustainability space, we are developing new technologies to efficiently employ discarded materials and fibers, while potentially reducing the use of petrochemicals and light-weighting our vehicles for desired fuel economy,” says Debbie Mielewski, senior technical leader of Ford’s sustainability research department.

The growth cycle of the agave plant is, at minimum, a seven-year process. Once harvested, the heart of the plant is roasted and then grinded, with its juices being extracted for distillation. Remnant fibers are then used to make compost for agave farms, agave paper, and now, bioplastic materials.

“There are about 400 pounds of plastic on a typical car,” Mielewski says. “Our job is to find the right place for a green composite like this to help our impact on the planet.”

In turn, Neil Schloss, 57, Ford vice president and treasurer, will add the role of CFO, Ford Smart Mobility LLC, a subsidiary formed to design, build, grow, and invest in emerging mobility services. In this role, effective Aug. 1, Schloss will have full responsibility for the financial operations of Ford Smart Mobility.

Schloss has served as treasurer since March 2007. With his added responsibilities, he will report to Bob Shanks, Ford’s CFO, and Jim Hackett, chairman, Ford Smart Mobility.